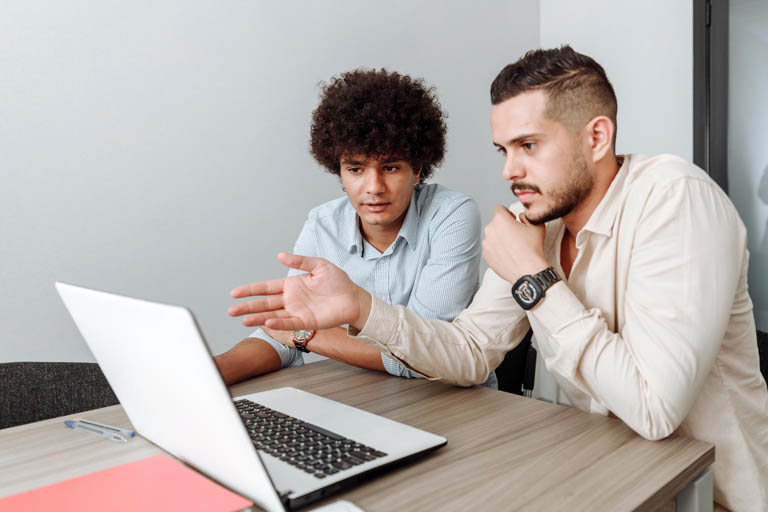 Most companies don’t prepare their employees for real-time feedback. So when you join a company that prioritizes a culture of giving feedback, it can hit you hard when you’re not used to it. Leaders need to get ahead of this bumpy experience by embedding feedback culture into every level of their organization.

To do this well, train your organization on exactly how to give people feedback. There’s a fine line between being really mean, but impactful and being very nice, but useless. Find a balance so you don’t unintentionally trip a wire and upset someone but can still get your message across.

Start by setting the tone and expectation that feedback is going to happen from the get-go. A culture of feedback allows you to deal in the moment so don’t wait until 1:1 meetings to share your thoughts with colleagues. It’s going to be uncomfortable at first but I always remind my manager that I'm not trying to pick a fight, I just want to make them great.

What does it mean to give feedback?

Feedback should come from a good place, keep everyone’s best interests at heart, get to the point, and be blunt. If you’ve invested in your relationship with someone, they won’t take negative feedback personally. Once you can have this type of conversation without things escalating further, you’ll know that you have a strong culture of feedback.

The most important thing is to make sure that you’re mapping your feedback to an action that needs to be corrected. Be cautious about giving reactions without feedback. We all react, but not every situation needs to turn into a conversation.

Help your people understand that you’re not giving feedback from an emotional or visceral place. You’re giving feedback and articulating the evidence behind it so they can change their behavior and correct it for the future. It’s hard to give feedback. It’s much easier to say nothing and let people keep screwing up. But the feedback you avoid giving always has a way of coming back to bite you.

A sales rep wants to give feedback that will change the way their manager talks about the rep during team meetings. Here are two approaches the rep can take:

The first approach was an emotional reaction that offered no guidance on actions the manager can take to fix the situation. The second approach made it clear what exactly needs to change.

Here are a few more examples of hard but useful feedback:

The very best managers take formal information and turn it into an informal conversation. Instead of going through rigid rules about changing behavior, you can have a real interaction based on a culture of trust.

A culture of feedback starts at the top

The first time I attended a board meeting, I was shocked, surprised, and petrified that the people in the boardroom were standing up and screaming at each other. At first, I thought, this is bad, the company is in trouble.

But it deescalated so fast because the feedback wasn’t personal. They were arguing their opinions based on data, it wasn’t about the other person. Within 3 minutes of screaming, they were laughing together. They knew how to give feedback to their peers.

Building a culture of feedback is a top down exercise. Your executives, directors, and managers have to be comfortable giving each other feedback before you start applying it to individual contributors. It’s harder to change the behavior of your peers, making this a really important first step.

I recommend following Patrick Lencioni’s exercise called Start, Stop, Continue. A group of peers, like sales managers, take turns giving each person in the room advice on what they should start doing, stop doing, and continue to do. Here’s an example:

Be prepared for a rocky start

The first time you do this exercise as a team, it might not go well. People are uncomfortable with receiving feedback about their weaknesses in public. But the end goal is to habituate everyone to hearing feedback on a regular basis. You can still respect each other, give feedback, and not make it personal. We all have things we need to improve on and everyone needs to pull their weight.

“The most brilliant relationship that can exist at work is to look at someone and say, you’re being ridiculous… and they understand and get it.” - Tommy McNulty

Feedback can become a cherished part of your culture

In my experience, people even become proud of the negative feedback. They wear it as a badge of honor. I used to give new managers a lot of harsh feedback during their first 2 to 3 months because new managers simply just don’t do things super well. A lot of people didn’t like me for that. But as a leader, we have to have the courage to habituate them to these types of conversations and be willing to engage in the moment.

It’s always going to be hard to hear harsh feedback because it hits closer to home. When your boss asks why they should trust you to manage your team’s pipeline when your own pipeline is a mess, it's going to sting.

Your culture should aim to reframe your relationship with feedback. It’s a gift to have these conversations so assume positive intent. Managers want what’s best for their reps and they aren’t doing any favors by being nice all the time. Successful managers are useful, not nice. Successful teams are willing to have hard conversations with one another.

The future of feedback at work

Millennials view the world differently. They don’t want to be inauthentic or withhold honesty for the sake of the process. We’re going to see a revolution in what it means to be a leader as more millennials take on executive roles. Because being super buttoned up all the time won’t help you attract people-oriented people to your company–people who value a culture of feedback.